Consolidating Recipe Costing at a Brewpub with meez

Ross is the tech-savvy chef of a craft microbrewery pub who no longer spends hours on Excel to cost his seasonal recipes. The Premium meez member shares how he discovered and implemented the tool at The Grizzly Paw Brewing Co. in Alberta, Canada. 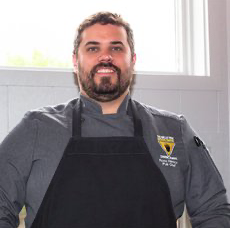 “I can’t tell you how much time I’ve saved costing recipes. I used to spend hours in front of Excel trying to figure out costs and yields"

The Story of Adoption at The Grizzly Paw

Executive Chef Ross Hanson develops the seasonal pub fare menu of burgers and comfort food for beer tasting Thursdays to Sundays in Canmore, Alberta. He toyed with two apps he can’t even recall the names of before discovering meez through an Instagram ad and signing up for a free two-week trial.

“We tried two similar applications, but they didn’t have the same processing power and were way harder to use and manage — not intuitive. I was basically using Excel spreadsheets,” he admits.

Ross self-onboarded, importing his own recipes and playing with the features for those first two
weeks.

“I copy and pasted from Word documents which was another tool I didn’t believe was going to work before I actually saw it in action. I was surprised at how easy that was and how quickly the system picked up on it and was able to translate it. I did most of the importing myself.” He extended the trial for two weeks to “sell it upstairs.” The pub activated a Business membership when Ross made his case:

Recipe Development Before and After meez

Ross changes his menu three or four times a year and plans prep for his team once a week.He’s implemented meez to cost his recipes and disseminate prep.

“That process to write your recipes, build your menu costs and create a manual for your staff is now all one step. It happens all at the same time, and the system is super user-friendly.”

Part of that process is scaling and calculating waste.

“It frees up a lot of my time. I think it takes a lot of the questioning out of scaling recipes or when you’re relying on staff members or the prep team to scale recipes to a certain amount. It takes the question out of whether they can scale it and apply the math properly. Even recording waste at the end of the week or the end of the month, which I didn’t think about. As long as my staff is measuring waste in weight or volume that’s in line with the product that they’re wasting, I can enter that and get a real value for what my waste is instead of estimating that it’s 2% of sales. I can track a real value.”

Ross activated his account and ultimately upgraded to a Premium membership for meez’s “ease of use and efficiency.” The Grizzly Paw’s sous chef, chef de partie, prep team, general manager and controller are all team members to collaborate on the platform. They’ve imported and created nearly 300 recipes with more than 400 ingredients and no longer need Excel in the culinary development process.

Ross’s favorite feature that stood out among the apps he’d tried is unit of measurement. “Just how effective that is, either importing it yourself or being able to translate it in the scaling part of it, that’s overall my favorite. The product we used in the past said that it would do that, but it didn’t do it in an effective manner or you’re always updating it because it didn’t register right.”

How The Grizzly Paw Uses meez

“I can’t tell you how much time I’ve saved costing recipes. I used to spend hours in front of Excel trying to figure out costs and yields,” Ross reports. Another benefit has been navigating the pandemic-driven supply chain issues. “It’s easier to see trends. In Alberta, we’re seeing a huge rise in beef prices as I’m sure we are all across North America. I’m able to look at it and see the things we need to increase cost on because of x, y and z just by knowing how that cost trickles down from the products we buy to the products we sell.” That’s because meez members can calculate food cost by portion size, dish sell price, food cost percentage or profit margin within the tool and adjust accordingly to meet goals. The Results meez has streamlined Ross’s process, simplified scaling and food costing, and facilitated collaboration in the kitchen and with management.

Ross says. “Communication’s been a lot better. Something that’s maybe underwritten is the fact that you can comment on any recipe and say ‘hey, I’ve updated this, make sure you double check this,’ and it goes to the prep team or it comes back to me so we can keep in communication without actually being in the restaurant 24/7. That has been way more efficient.”

Get going with meez

Start your free trial to cost recipes more efficiently and effectively, scale with accurate units of measure, communicate prep and menu changes to your team while spending less time in the kitchen, and calculate a real value of food waste. Save time, be more efficient and import recipes easily with meez.

Book a DemoStart your Free Trial