The Real Good Life owner Maggie Joos discovered meez at an industry conference in early 2021 and tasked Director of Operations Ryan Buenning with investigating a recipe management system for their nutritious, unfussy meal delivery service in Milwaukee. A year later the company that saves its customers time with mindful meals ready to reheat has heated its meez account up with almost 300 recipes and saved hours on scaling and organizing. 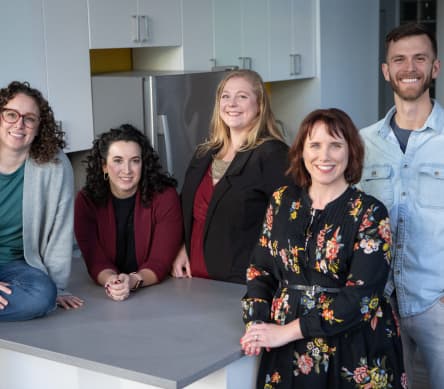 "It feels like an overwhelming task to get costs in line, and now the kitchen managers are excited about it.”

The Story of The Real Good Life

Ryan moved up from a part-time kitchen assistant to running the operation so he knew the kitchen’s process and pain points. He booked a demo and conducted a trial of meez and then compared the functionality with parsley to get his operation more organized.

The Opportunities of Scaling Efficiently

With a health education and sales background, Ryan was storing all of the company’s recipes on Google Drive. Scaling a recipe that served 12 to accommodate 12 orders meant arduous multiplication or Excel formulas and adjustments during prep. Meez’s laser-accurate scaling and order list exports stuck out to him.

“Not having leftovers or extra is huge,” Ryan said of the scaling, adding how they print recipes with hero photos all on one page.

“Before we just managed by communicating how to package things, and now it’s spelled out and dummy proof.

Ryan was ultimately compelled by the speed with which meez’s customer success team responded to his emails and said, “The price point made it an easy decision and to keep re-upping.” He liked the user-friendly landing page; having ingredients, prep steps and a picture of how each meal is packaged in one spot. He found meez’s interface to be smoother and prettier than parsley’s, which made the app more pleasant to work in daily.

Two members of meez’s customer success team conducted the product demo for Ryan, along with his weekday and weekend kitchen managers. Their first questions were how long it would take to implement the tool and if they could pull shopping lists. Meez had just released the export order lists feature that was just what Ryan’s team needed, and assured him that users can take advantage of a ton of meez's functionality right off the bat and that having your recipes uploaded and invoice processing definitely helps speed up the process.

Ryan tested meez’s recipe upload services with his first 10 recipes for free, and pleased with the process, paid for 103 recipe uploads, which meez completed in a week.

Today, The Real Good Life’s kitchen prepares and packages meals using meez everyday with 273 recipes and counting. They export order lists for shopping and print out recipes with photos to reference.

“Google drive was great, but meez checked extra boxes like scaling up, which took it to the next level.”

He catches up with the meez team quarterly to gauge when The Real Good Life will upgrade for nutrition analysis and begin mapping ingredient costs. “We lean on Sergio for food stuff and Doug for tech stuff,” Ryan reported.

The meez team just imported TRGL’s first six purchase items to start. “The big, shining thing it’s done for us is motivating our team and creating a buzz and excitement around a big, boring type of work. It feels like an overwhelming task to get costs in line, and now the kitchen managers are excited about it.”

Book your demo today to see how meez can motivate your team with easier, more efficient recipe management.

Get going with meez

Start your free trial to cost recipes more efficiently and effectively, scale with accurate units of measure, communicate prep and menu changes to your team while spending less time in the kitchen, and calculate a real value of food waste. Save time, be more efficient and import recipes easily with meez.

Book a DemoStart your Free Trial

Brew Pub
Consolidating Recipe Costing at a Brewpub with meez